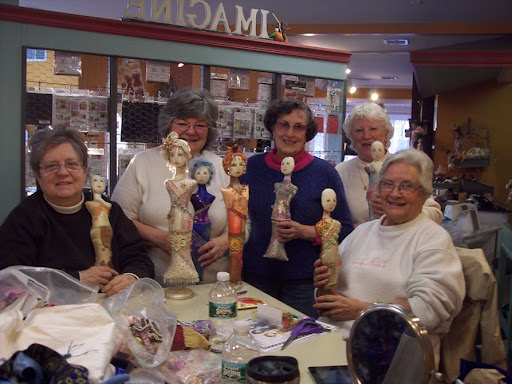 Taught a wonderful group of ladies from a local Quilt Quild.  The chose beautiful fabrics and made wonderful dolls.  Thanks again Judy, (me) Joan, Diane and Phyllis.  And again, special thanks to Colleen, Miss Artsy Soul.
Posted by Stephanie at 9:36 AM 2 comments:


Saturday, December 22,  we adopted a   little Maltese, Diva, from a shelter. She is such a joy - so playful and LOVES my Ed.    We were both very sad and missed our little Diamond terribly.  I said we were going to wait to adopt again, but I just couldn't resist looking through Petfinder.  Saw a few rescues from puppy mills in Delaware but Ed said he wasn't ready.  Then I saw the picture of Diva and told him she was local and he said we could look.  Well, she came home with us.  She certainly made Christmas fun.  We gave her a bath on Sunday which we all survived!  On Christmas day, we blocked off the Dining room while we ate and the next thing we knew she was on the kitchen table looking at us!  She then became a napkin replacement on various laps around the table while we finished dinner.  We took her to the vet to be checked out on Dec 26 and was told she  was a very sick dog and needed emergency surgery. She was bleeding internally and had a uterine infection (she was never spayed,  is about 8 yrs old, and the shelter told us she was in heat). We left her there so they could do the surgery that afternoon and got a call saying her blood count was low and should be taken to an animal hospital that could do transfusions incase she needed one though they had her on IV because she was severly dehydrated and antibiotics because her gums and ears were infected too. We said we would pick her up and bring her to a hospital which was in tinton falls about 20 miles away. We called right back because we changed our minds when we realized it was sleeting and snowing out so I asked them to do the surgery.  She was so active and strong, I felt sure she would do OK without a transfusion.  She had the surgery on thursday am and she didn't need a transfusion. She came through great but still had to stay at the vet on IV and we wouldn't be able to see her until Friday.   We went to see her and she was on IV, very sluggish because of the pain meds but still wanted to be held by my hubby.  We finally got to bring her home Saturday - she stayed at the vets longer than she was with us! she has been spending most of her time laying between us on the couch sleeping after her dose of meds and pain pills and draping herself on my husband.  She just LOVES him and doesn't want to be far from him.

We knew she would need some medical attention, but didn't know how much. The shelter doesn't have the funds to have the dogs checked out by a vet so everything they told us about her was wrong. She also has tumors on her belly.   The vet removed and tested the largest for cancer and luckily it was benign. It is hard to believe she was that sick because she was and is so lively-scampering around and playing.

Took her back to the vet yesterday because part of her incision looked red and swollen but vet said she was fine - I am such  a worrier. The people at the vet office loved her and refer her to her as the fabulous diva.
I am glad we adopted her -she would probably be gone is we hadn't.  So far it's a very happy ending thoughI am not allowed to access Petfinder anymore or adopt older dogs. :-)
Posted by Stephanie at 1:03 PM 4 comments: 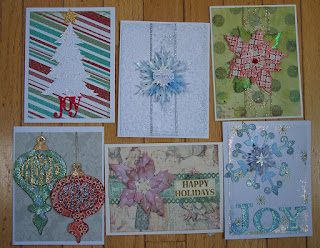 I was a bit behind in getting my cards out this year because I lost my mail lists when my computer crashed and they couldn't be recovered.  SOOO I had to recreate them and I know I left a lot of people off and for that I appologize.  Here are some images of the cards I made.  The basic designs didn't change, just the papers I used did so most were different but there were some duplicates. 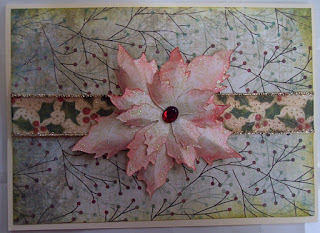 Don't tell anyone, but my favorite is the snowflake on the white background with believe in the center. That is a Sizzix.Tim Holtz Alterations Strip die.  I used printed paper and then added white paint and blue ink and lots of Stickles glitter glue.

Posted by Stephanie at 12:14 PM No comments:

Stephanie
Since I retired from my "day" job in November, 2003, I have discovered Cloth Dolls. For as long as I can remember, I have been doing fiber arts from making clothes to all forms of embroidery, weaving, Knitting, etc (except tatting). I love to combine my love of anything tactile with creating dolls and other items. Check back to see my latest "stuff".

My Fav Blogs and Sites